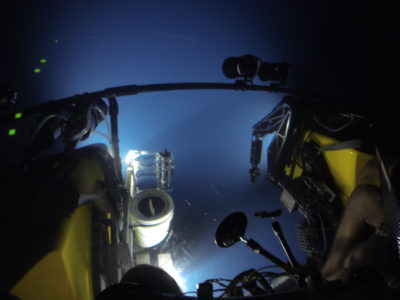 In the late 1990’s, we had our first exposure to the magical world of biofluorescence while working with Dr. Charlie Mazel of NIGHTSEA during his beta testing of instruments and lights to excite and quantify fluorescence signatures in corals. Subsequent work was undertaken to use fluorescence excitation measurements as a tool to assess health in bleached versus unbleached corals (Lombardi et al. 2000).

We’ve used tools for underwater fluorescence for protein prospecting, leak detection, and artistic photography. This includes deployments using conventional scuba, rebreathers, SSA equipment, and small submersibles. In 2013, we participated with a team from the American Museum of Natural History to explore fluorescence in corals and fishes in the remote Solomon Islands. This work was later featured as an exhibit at the AMNH and became the subject of a NOVA special called ‘Creatures of Light’.

We continue to look for novel applications of underwater fluorescence in both scientific and industrial settings, and also hope to catalyze more commercial use of its counterpart, bio-luminescence, in years to come.