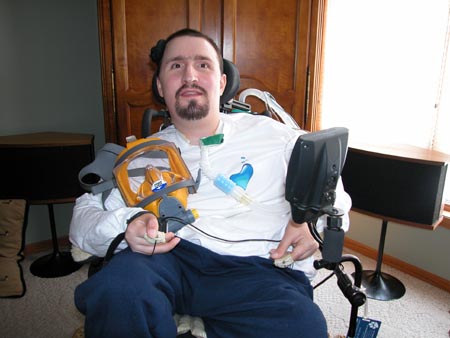 .: first to dive while dependent on a ventilator

.: among the first to dive with near full paralasys 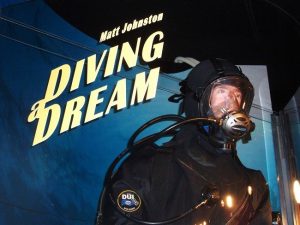 On Exhibit | Diving a Dream

Matt Johnston’s Will to Live, & Dream to Dive

Matthew Johnston has spent a lifetime battling the complications of Duchenne’s Muscular Dystrophy. The life-threatening disease leaves Matt confined to his wheelchair full-time, with only the use of his fingertips. Complicating this, Matt is unable to breathe on his own – he requires full-time use of a ventilator.

Despite this, Matt had a vision…to open an entire new world – the underwater world – for those with Duchennes Muscular Dystrophy.

Sometimes the best things in life take time, however this triumphant push by Matt was one where time was THE limiting factor. At age 27, he set out determined to make his dreams come true, facing the reality that many with his disease live only until their young 30’s. There was work to be done…

In the summer of 2004, after an intensive grassroots push by Matt; his family, and close friends set out to contact anyone in the diving industry that would listen…hoping for help, answers as to how to solve the many technical and physical obstacles for such a project, including funding, and simply a next door to open that would take things one step closer…Matt aligned with Ocean Opportunity to create his ‘Diving a Dream’ project.

Diving a Dream has received support from throughout the US, to New Zealand, South Africa, and all across Europe. Matt continues to inspire many, and is an icon in the diving community.

Your donations will help keep Matt’s legacy alive and inspiring others.

Matt’s primary obstacle was being unable to breathe independently; Matt’s lung function is fully dependent on ventilator – submerging to just 5 feet maximizes most vent’s pressure delivery capabilities. A second issue was keeping Matt’s trachea dry, as this would pose a very real risk of drowning. A custom drysuit was designed by DUI Drysuits that allowed passage of his vent tubes through the suit to his trachea. This development allowed Matt to immerse within the water for the first time in more than 10 years and relieve the weight of the world.

With Matt’s paralysis, he was dependent on his dive safety team to monitor his dive and the integrity of all life support equipment. Early in the project, a set of eye signals were developed. As the project evolved, Ocean Reef Group sponsored Diving a Dream by providing underwater communications equipment. This allowed Matt to communicate directly with his dive team and surface support.

A final limitation…the dive industry had never ‘certified’ a diver in Matt’s condition. This restricted pool access, the ability to purchase equipment, and exposed numerous liability hurdles in affording Matt his dream. Michael Lombardi, the Diving a Dream Coordinator, Drew Gerling, Matt’s dive instructor, and Sean Harrison of Scuba Diving International, teamed up to create a specialty program that would afford Matt with a unique certification…SDI Scubility Diver #1.

Since 2004, the collective support of many has afforded Matt Johnston and Diving a Dream numerous successes. With the assistance of Dive Instructor Drew Gerling and Rescue Diver Frank Fabio, Matt undertook his first water therapy sessions after not being immersed in water for more than 10 years. From that point, a number of carefully executed steps were put in place to slowly acclimate Matt to being completely immersed and dependent on his dive team. Custom techniques were developed, as was equipment, communications, and emergency procedures.

Over the course of 2 years, Matt reached over one consecutive hour underwater in a pool, to being the first with his condition to dive in a lake, and as of November 13, 2006, being the first to dive in the ocean. This absolutely epic event was featured on NBC’s Today Show in January 2007.