The Gaps to Fill to Make Diving Important

To make diving important – that is, viewed as an essential intervention vehicle for humanity to exist in balance with the Blue Planet – there are several key gaps to fill which break down contemporary diving practices.

We can fill these gaps with advancements in ‘technical diving’. Technical diving itself has always been about adopting new technology [and/or techniques] to help safely and efficiently extend the range of any given diving endeavor. Things like nitrox, mixed-gas, staged decompression, and rebreathers of today have all run their course in becoming progressively more standardized tools of the trade.

In the Hands of the Diving Scientist

Within the occupational setting of scientific diving, where diving is used as a tool to gather data for the advancement of science, adoption of progressive technology and techniques can be very, very slow given the bureaucracies of the institutional realm. This leaves the majority of progressive program development coming from the private sector. At the same time, private sector innovations are needed to take science to new depths, and even new frontiers. The gap that lies in this technology transfer is the bottleneck for future advancement in human intervention.

To make substantial advancements in ‘technical diving for science’ today, our community is in need of a massive paradigm shift that again puts humans at the center of underwater problem solving across the spectrum of depths, distances traveled, and within novel environments. While not a replacement for undersea robotics and autonomous vehicles or sensors, ‘the human element’ is forever needed to provide the value of experience, reaction time, situational and spatial awareness, and immediate problem-solving and response to change. Closing the gap requires viewing every diver, and every dive – regardless of their background, affiliation, qualifications, or training – as an opportunity. Each and every diver today is the best kind of ocean ambassador – we should be providing the tools to put them to work. Every dive is an opportunity to gather data and observations otherwise unattainable.

Ocean Opportunity Inc. was born in response to some of these challenges, and keeps ‘the human element’ central to its evolving programs. We engage in developing new policies, drafting standards, funding related R&D, and demonstrating new techniques through productive programs that advance scientific exploration and lead to the new discoveries that improve our quality of life.

It's a matter of perspective... 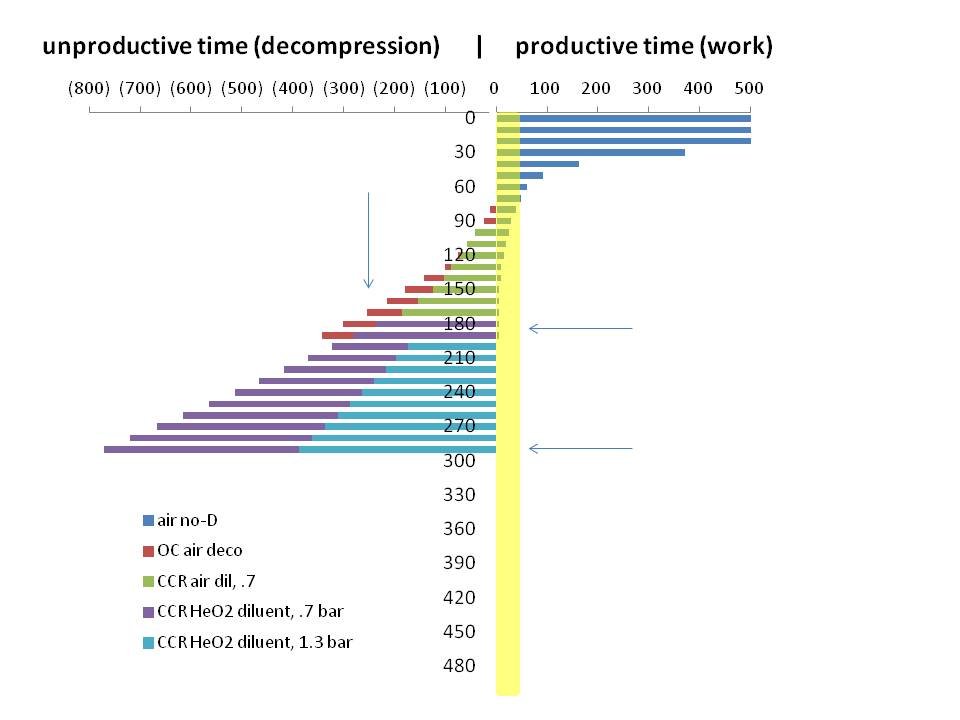 For almost a century, underwater science has been built upon an average dive time of just 45 minutes. This is represented by the yellow bar above. This very limited human-underwater interaction has resulted in thousands of studies, millions of observations and data points, and billions of dollars in commerce and associated public policy.

These short 45 minutes of dive time are due to limitations in technology and human physiology – both of which can be overcome with a focused initiative and investment in to improving human intervention. Above, to the right, represents these ‘productive’ 45 minutes spent. With increasing depth, we incur decompression obligations which is generally unproductive time spent. Obvious in this visual representation is that the cost and complexity of enabling that mere 45 minutes at depth quickly becomes impalpable. 45 minutes at just 190 feet of depth comes with almost 4 hours of total dive time to safely decompress and surface, and similarly 45 minutes at 300 feet of depth can cost a full day or more. These dives are indeed made, but the cost exceeds the value – it’s a losing proposition.

Exploring these limits in human physiology sets the foundation for all diving technology research, though often comes with disregard as a priority vehicle for subsea intervention.

Why? Well, cost, complexity, and perceived risk to begin with. However, the opportunity MUST not be overlooked.

The value of putting a person there, on site, with their eyes and hands interacting within that space is needed to interpret new environments, think critically about solving new problems, and to challenge us all to better understand humanity and it’s role here on the Blue Planet.

That’s where we live, and work, and where we plan to take you…

Help us to Redefine the Human Element

Bridging the gap between scientific, commercial, and recreational diving with new technologies will help place humans at the center of underwater problem solving in new frontiers.