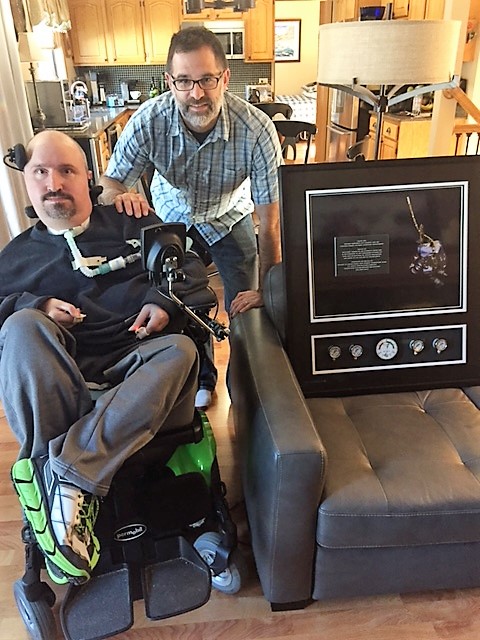 In an effort to bring our work more full-circle, we gifted Exosuit ADS #001’s gauge set to Matthew Johnston, our partner in the Diving a Dream project. Matt’s remarkable journey with us started in 2003, and then in 2006 he became the world’s first ventilator dependent diver. This 2017 presentation was significant in that it marked his 40th birthday, and represented the 10th anniversary of his feature story on NBC’s Today Show.

The Exosuit gauge set was dived, and damaged, during its first mission deployment in Antikythera, Greece in 2014, where a multi-disciplinary team set out to continue archaeological investigations of the infamous Antikythera wreck site. We presented this to Matt in a symbolic tribute to making the inaccessible more accessible – something that we divers hold at the heart of all of our progress.

Together with Matt, we presented this gauge set to the History of Diving Museum in Islamorda, FL, for their inclusion in Matt’s permanent exhibit.

Gifted to
Matthew Johnston, SDI Scubility diver #001
in recognition of his pioneering efforts to
push new boundaries of human inquisition
and bring us all Oceans of Opportunity