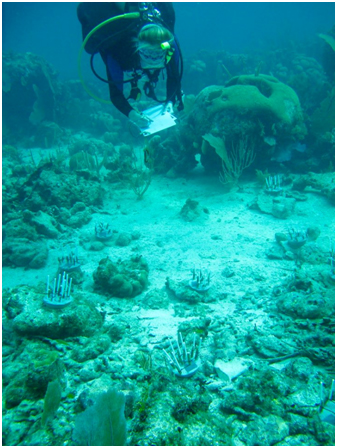 Many local and global stressors threaten corals worldwide, which include disease, pollution, overfishing, coastal development, ship groundings, and increasing ocean acidity and temperature due to global climate change. In the Caribbean, large swaths of the important reef-builder Acropora cervicornis (staghorn coral) have died off in recent decades, effectively changing the entire shallow seascape to one that does not fully support desired ecosystem and economic services. Local stressors can be reduced with proper policies and enforcement, but climate change will continue to affect reefs for decades to come, even with immediate emissions adjustments.

In recent years, active coral restoration has been an increasingly applied method for reef management. This technique involves growing coral in a protected nursery area until colonies are large enough to be “planted” on local reefs. Scientists are beginning to discover natural variation that exists among corals (including acroporids) that contribute to a more robust colony – for example, resistance to disease and high sea surface temperatures, and fast wound healing rates. Use of corals with such traits confers a greater possibility for the long-term success of active restoration.

Katey has previously tracked two identified populations of staghorn coral at Turneffe Atoll, Belize, and is now conducting experiments to discover possible bleaching resistance and/or differences in wound healing rates among individual colonies. As corals are colonial organisms and can regrow from small pieces, scientists can break off fragments of coral from large colonies without long-term damage. These pieces are moved between environments (for example, from a cool deep part of the reef to a warm shallow area). In doing so, our team can gather a better understanding of this coral’s physiology, including its chlorophyll content, symbiotic algae density, as well as its genetic response to heat stress. Fragments of corals possessing such identified traits will be grown on three local underwater “nursery” tables for later outplanting to surrounding reefs, during upcoming active restoration projects that will hopefully assist in rebuilding the local reef structure from the seafloor up.

Currently there are two coral growing tables at shallow reef sites near Calabash Caye, Belize. The research team anticipates building at least one more table in Fall 2017. These tables can be populated with coral fragments with well-described physiological and genetic characteristics to increase chances of long-term survival and success in the face of continued global climate change, once they are planted out onto the reefs as adults.

Detailed coral reef recovery plans generated by organizations such as NOAA (the National Oceanic and Atmospheric Administration) call for call for genetic research to better understand mechanisms that govern health, growth, and resilience of these organisms in the face of climate change, so this experimental work will contribute to this growing body of knowledge. Additionally, this research will inform a non-profit collaborator in Belize (Fragments of Hope) of potentially more “hardy” variations of staghorn to use in their future outplanting/active restoration projects.

All citizens of our Blue Planet should appreciate this work because coral reefs provide so many economic, ecological, and social services that are sometimes under appreciated. Without the actual structure of reefs, we wouldn’t have 25% of the world’s fish species (including very important commercial species), nor healthy seagrass beds and mangrove forests, nor protection from shoreline erosion during hurricanes, nor a wonderful place that tourists will spend money to see in developing countries to visit, nor the indescribable beauty of reefs that so many of us enjoy. As reefs used to be dominated by staghorn coral, a long-term goal that we should work towards is restoring reefs to their original, healthy, effective state. With the continued prospect of global climate change and predicted increases in sea surface temperature even with modest worldwide emission decreases, we must go about reef restoration very carefully. Using science as a tool can help everyone involved make the best decisions about how exactly we go about restoring reefs with the best long-term prospects possible.

The 2017 field season is made possible with support from the following: