For this last installment of our review of the film ‘Knowing‘, we will discuss the reference to Ezekiel’s Chariot, and the prophecy that it conveys.
Some background – Ezekial is the author and central protagonist of the Book of Ezekial in the Hebrew Bible which goes on to discuss his prophecies of the destruction of Jerusalem. In 592 BCE, Ezekiel describes an encounter where is is visited by God appearing in “the likeness of man” who is riding a Chariot (or Merkabah in Hebrew) accompanied by cherubs. This vision is the cornerstone of the ‘Chariots of the Gods‘ theory proposed by Erich von Daniken where this and many other encounters with God or ‘the gods’ are proposed as encounters with extraterrestrials in our ancient past. 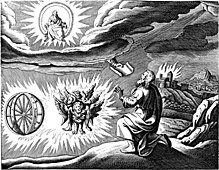 This famous depiction, engraved by Matthäus Merian is a hugely controversial among Biblical scholars and extraterrestrial investigators, as there are broad implications in Ezekial’s prophecy for both interpretations regarding the end of days.

In ‘Knowing’, an adult Lucinda Embry is possessed by the messages she had received as a child. In her secluded and abandoned adult home, the image of Ezekial’s chariot encounter is discovered, fitting into the lineage of deterministic fate that has been progressively decoded throughout the film from Lucinda’s childhood codex.

If we take a literal and futurist interpretation of the Ezekial Prophecy, we must also look at the Book of Revelations, as it pertains to THE END. In Revelations 21:1 (to be discussed here in depth later), St. John the Divine writes, “Then I saw “a new heaven and a new earth, for the first heaven and the first earth had passed away, and there was no longer any sea.” In the film, the world is discovered to come to an end by solar flares – excessive heat. This would not only vaporize life as we know it, but would dry up our oceans as well – just as described on this verse from Revelations.

In the movie, a boy and girl (both ‘chosen’ by the extraterrestrials) are taken by aliens appearing “in the likeness of man” on their ship (Chariot) and put on a new planet to start this whole mess over again – my suspicions are with the intent to get it right this time around in the eyes of our God or ‘gods’ and to preserve their own future sustainability.

Now back to today in the real world – these elements of our history such as Ezekial’s Merkabah, Biblical prophecy from Revelations and elsewhere need to be taken so very seriously. The efforts taken thousands of years ago to write, document, and preserve knowledge were incredible feats as compared to today, where we only click ‘save’ and it’s there forever. I know that I don’t like to waste time, and I’d suspect that folks back then didn’t either. Why go through such great lengths to preserve useless knowledge or information? They wouldn’t have. Period.
The question is how to interpret this information, and in doing so, understand whether we are guiding humanity through its deterministic fate (read Knowing Part 1), unveiling a codex of our destiny (read Knowing Part 2), or coming to terms with a prophecy that underlines our fate here on Planet Earth.
So, for all of you 2012 fanatics out there – if it is the inevitable, then so be it. But, we should be careful what we wish for as we might very well be carving our own path to the end. Hopefully Nicholas Cage is working on this as we speak!
References