Dive In, to an Ocean State of Mind 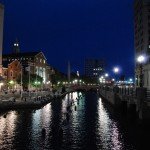 Our Lombardi Undersea Resource Center, or LURC, in Middletown Rhode Island provides the physical hub and incubation space for developing new technologies and techniques for human ocean exploration. Further, much of OO’s creative development work takes place from within the walls of several coffee shops located in Providence’s East Side.

Despite the deep influences of the Island Nation, our roots are at home in the Ocean State of Rhode Island, USA. Its energetic and flourishing maritime industry largely influenced our upbringing, and the coastal community has cradled our humble beginnings. Further, the Ocean State’s capital city of Providence is at the heart of an intellectual engine that makes up the New England innovation sector.

The Ocean State has its own history in exploration with Narragansett Bay being explored by Giovanni di Verrazzano in the 1524. Further, Rhode Island is the settlement retreat of 17th century separatists for religious freedom, interestingly, quite contrary to the 18th century loyalists that settled the Island Nation.

With field programs taking us throughout the United States, the South Pacific ,Europe, the Caribbean, Hong Kong, and as far as Antarctica, we continually think about impacts at a global scale – recognizing that for every action there is an equal and opposite reaction that helps to sculpt the world we live in.

However, it is our local actions that we embrace as our strengths, and provides the many tools, techniques, and leverage to reach out more globally.

Be it advocacy for local shark populations, extending the accessible range of local dive sites, creating artificial reefs, or engaging the humanities community with our work, OO is proud to help the Ocean State stand tall and up to its name.

Help Us Give Rhode Island Diving a Boost

Your donations help us to promote an ‘Ocean State’ of Mind for all citizens of our Blue Planet.

Read More to Open your Ocean State of Mind

Today was our local fire department’s ‘Fill the Boot’ day to raise funds for Muscular Dystrophy research, awareness, and community support. As I dropped in my handful of cruddy change from the cup holder in my truck I couldn’t help but reflect back on our work with Matt Johnston and his Diving a Dream project to help realize his dream of becoming the world’s first ventilator dependent diver. At the time of Matt’s journey kicking off – about 15 years ago – his dreams of overcoming the challenges of Muscular Dystrophy to submerge underwater were all pie in the sky stuff…to say it was a ‘dream’ is an understatement. But he did it… And today, 15 years since kick-off, his achievements still stand alone. That...Read More
They say “one man’s trash is another man’s treasure”, and that may well be the case for pickers galore, or even for we subaquatic pickers – wreck hunters, salvors, and history nerds. But it’s not all fun and games… In some cases, underwater wreckage is actually a watery grave, and must be treated with the utmost respect. In others, it’s a mass of plundered goods. And in still others – it is truly, utterly, and sadly trash. We’ve been pleased to do our limited part in shedding some light on underwater pollution over the past couple of years. In fact, perhaps much as it has been intended, the film ‘A Plastic Ocean’ got us out there on the streets along with our colleagues at EcoRI...Read More
My lack of blogging in recent months has been due to anything but lack of interest or creativity. To the contrary, there is so very much to share with the world from the journey through this past stretch… Despite the tremendously volatile industry I’ve managed to practice within – that being diving of the working kind – I’ve now survived more than two decades. Through that time, I’ve had some highs, some lows, and at times what would appear to be insurmountable failures. I can honestly say that at times it feels as though I’ve lived multiple lifetimes already, each chuck full of life lessons; while at the very same time I still see a only starting line out there on the horizon. Despite the...Read More
If this image bothers you, well – it shouldn’t. This is the reality of life and death on and beneath the sea. Since the start of May, I’ve averaged about 25 hours per week underwater. That is not my busiest stretch, but certainly a far cry from being a sedentary land-lubber. To do that kind of time, there of course needs to be a purpose or mission, and the time doubles in providing time to find purpose in life while immersed within the world around us. The raw reality of a largely virgin underwater environment lends itself well to finding numerous new purposes in life, but also frequently reveals a certain art in death. All this week, I’ve been met with carcasses of filleted striped...Read More
When the going gets tough, the tough go digging clams – quahogs for we Rhode Islanders that is. The journey of life never ceases to amaze me, and when viewed through that lens, as a journey, it’s amazing what can be taken in stride. Diving as a trade has blessed me with that outlook, and as challenging as swimming across the ebbs and flows can be at times, nature holds true in that the tide, like life itself, is cyclical. I’ve officially been diving professionally for 21 years this spring. Aside from a very short stint bussing tables and cutting the grass at a local golf course back in high school, diving has been the ticket – through thick and thin, good times and bad,...Read More
I like to think I’ve aged well with diving. There have been some grueling periods where I know I wreaked havoc on myself physically and physiologically during arduous working dives, but in hindsight, I was always smart enough to take the little things into consideration that I had a hunch would help me prolong my ability to stay in the game. That said, I have some clear issues that have resulted from diving, despite playing it safe, and much of this comes from prolonged exposure to cold. The first problem is my hands. In a pseudo-arthritic/carpel-tunnel-esque way, I have ongoing problems with strength in my hands and wrists. I’ve had numerous long winter days out there on the water, working hard with my hands, which...Read More
I struggle with the Christmas holiday, and have struggled for a significant portion of my adult life, and probably spend a solid month of every holiday season deep in thought about the how and why this is. I wouldn’t say its holiday depression per se, but rather a forced very careful, personal, and intimate reflection of the world around us. While I’m openly not deeply religious, I do believe in the fundamental spirit of Christianity and its root belief system in the Christmas holiday. Where things go wrong  for me for starts with “black Friday” and its resulting mayhem. Yes, this is the blackest day of the year. The fact that we live in a society that has so easily been manipulated by corporate greed...Read More
Today will forever be one of those days where every American will reminisce a bit and contemplate where and how we are moving forward. In my case, today the dive supervisor reminded me that this was the 4th anniversary of Lyle passing away. Lyle Smith was the owner of Coastal Diving in Middletown, RI – the guy that gave me a chance to cut my teeth in commercial diving, and who I then worked with for a solid 15 years; or rather learned many life lessons with for 15 years while out there taking the sea head on day after day and learning how to make a living out on the water. Lyle left us the same way he lived – hitting it hard out...Read More
‹ Previous 1 … 8 9 10